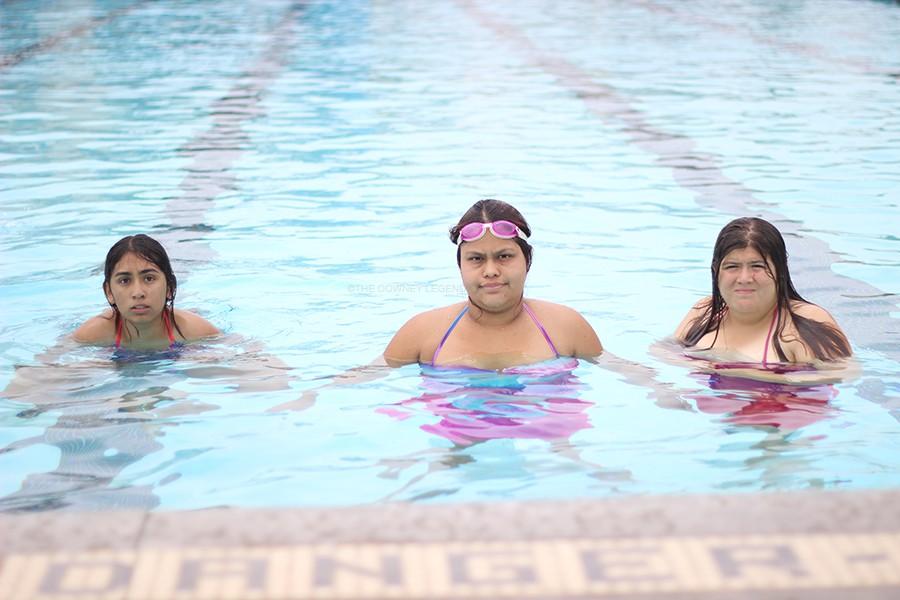 At Downey High’s pool, on June 3, seniors Haley Lueanos, Miriam Castillo and junior Raven Perez, take a swim for the final Amigos Club BBQ of the school year. “The pool party was really fun,” Castillo said. “It was a great time and very relaxing.”

On Wed., June 3, the DHS Amigos hosted their first ever Amigos Pool Party at the Downey Aquatics Center.

The Amigos met at the pool during their third period and came together to eat, swim and socialize. As the last event of the school year, many seniors took this time to reflect on their time in Amigos.

Senior Natalie Aguilar enjoyed the time she spent with because the students brightened her day with their contagious happiness.

“My favorite part of the club is seeing everyone happy,” Aguilar said. “When we are all together, we are all one and have no titles besides being amigos.”

The Amigos were able to spend one last event together even if this event missed one thing all the other events had: dancing. Dancing at the events was one of senior Valerie Ortiz’s favorite parts of being in the club.

“I could literally go wild and know it’s okay because my amigo friends are vibing out even more then I physically wished I can,” Ortiz said.

Although not many people went in the pool due to the weather, the club members were able to enjoy their time bonding with those who did not go in the water.

Junior Kyle Villa enjoyed being able to spend time with his fellow Amigos while also learning to socialize better with the students with disabilities.

“Everything we do to give back to the kids and see that they are happy and to see how happy they are to socialize with the general education kids really puts a smile on my face,” Villa said. “DHS Amigos is a great opportunity to gain social skills and get to have fun dancing with friends.”

DHS Amigos is club on campus that allows a connection and friendships to grow between the general education students and the students with disabilities that may not have been able to form before.

Although this is the last event of the school year for the Amigos, this July the Amigos have the opportunity to volunteer at the 2015 Special Olympics World Summer Games as Downey is hosting Team Ireland.