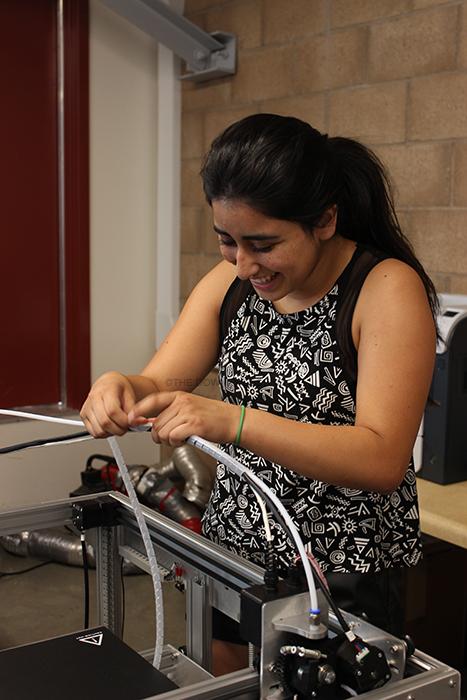 Every Wednesday afterschool, Warren High School transfer, Daniela Figueroa, 12, works on building a reading printer, in her engineering class, for the school to use. “All these new engineering classes are the only reason why I moved to Downey High School,” Figueroa stated.

At the beginning of the school year, construction at Downey High School was finally completed with new buildings including the D building, where the Project Lead the Way Engineering program is underway. The program includes classes such as Physics, Tech Core, Automotive Technology, Aerospace Engineering, and Robotics. All of these brand-new classes have state-of-the-art technology that have attracted forward-thinking students from both Downey and Warren High School.

With the addition of a new building, the program has attracted a teacher from Warren High School along with several Warren students.

During the construction and revitalization at Downey, principal Mr. Houts, who previously worked with Yamasaki at Warren, offered him a job.

“After Mr. Houts showed me the building, I said, ‘When can I start?’” engineering teacher Mr. Yamasaki said.

Although Yamasaki’s students were surprised at the situation, his moving was inevitable.

Senior Hannah Rodriguez, a prior Warren student, can substantiate. “He [Yamasaki] told me that he was looking into a possible position at Downey before Christmas; by January, we knew it was truly happening,” Rodriguez stated.

The transition, however, was easy for a lot of students. Considering their interest to pursue a career in engineering, they did anything they could to continue their pathway.

“I was new to Warren anyway so I never really felt like it was my home,” senior Belen Almaraz, who is also president of the Aerodynamics Club, said. “My closest friends were all a part of the engineering circuit, so I really didn’t mind leaving at all; it actually seems likes the admin here really appreciates our hard work.”

Outside the classroom, the ex-Bears have adapted to Downey’s atmosphere.

Technology in the building includes four 3-D printers, 60-inch touchscreen computers, and Gigabots created by Robotics students. “It’s been mind-blowing to work with equipment of the highest end and it’s definitely worth a transfer from Warren,” Hannah Rodriguez, 12, said.

These students proved to make a transition from Warren Bear to Downey Viking to not only work in engineering, but to strive for more from their dream career.