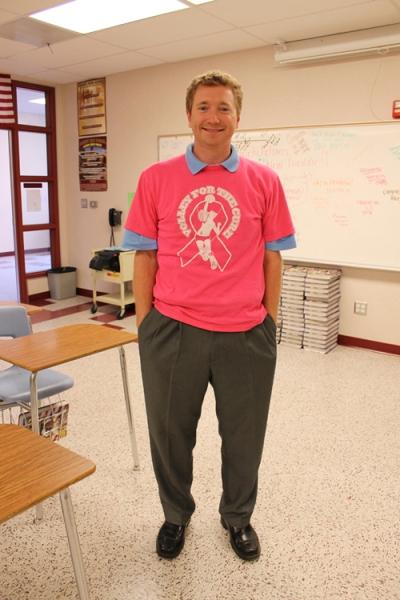 To Mr. Christopher Castile, acting was a natural born talent, but as he got older, he realized teaching was his true calling. It was during the first couple of weeks of school in Downey High when Mr. Castile shared with his class a little bit about himself. He shared hobbies, interests and even mentioned he was expecting a daughter who was on the way, but what shocked his students most was when he shared his past career as an actor.

“We were shocked,” Daisy Paez ,11, said. “You wouldn’t think a history teacher would’ve had an acting career.”

Castile began his acting career at the age of seven when his grandfather introduced him to his friend’s wife who worked for a talent agent named Judy Savage. She instantly fell in love with his humorous personality, and he soon started getting casted for a variety of commercials like: M&M’s, McDonald’s, Capri Sun, TJ Max, Kellogg’s Snacks, etc.

Being casted as Ted Newton in Beethoven the sequel was a very familiar role for him.

“Most of the time I played that nerdy kid,” Castile said, “so playing Ted was a comfortable role.”

After Beethoven, he continued his career on the show Step by Step as Mark Foster from 1992-1998 and provided the voice of Eugene Horowitz on the Nickelodeon series Hey Arnold! It was soon after that he retired and attended a public high school where he met his wife. He explained that he just wasn’t as interested in acting anymore and he wanted to do other things like spend time with his friends and girlfriend, play golf, and go to college.

“I just wanted to be normal,” Castile said, “I didn’t have the time to do what any other normal teenager did at the time.”

Castile is currently a U.S. History teacher at Downey High School and a Political Science professor at Biola University. For him, teaching is the most fun and exciting job he’s ever had. He simply loves what he does and how challenging teaching is.

Castile always finds a way to fill his class with humor and a positive environment; this makes his students pay attention and truly understand the lessons.

“You really feel like you know him as a person,” Renyoantonio Perez ,11, said, “I enjoy his class a lot.”

Castile explained that working as an actor is far more exhausting and didn’t get much out of it. He loves teaching because it’s far more fulfilling and loves to see his students smiling faces every day.