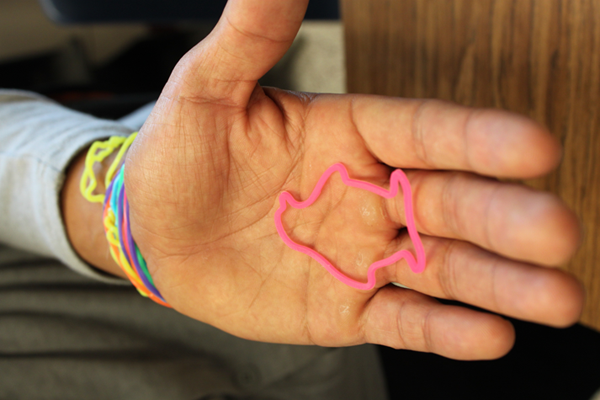 From Michael Jackson to various fruits, Silly Bandz have begun to entertain the students in all grades, especially freshman.  A man named Robert Croak repurposed rubber bands while he encountered them on a business trip in Japan.  Croak then made them larger, thicker, and decided to make them into shapes creating a new trend for kids. The first silly bandz were sold in November 2008 on the east coast. This fashion statement slowly drifted its way to the west coast making it a fashion–must-have.

“I have like three or four; I wear Spiderman, a car, and a duck,” freshman Evan Holmes said.

Now sold at stores like Hot Topic, Anchor Blue, and Spencer’s, students rushed to own some and be a part of this trend. Students compete to see who has better shapes or the most unique bracelets. A commonly heard phrase across the quad nowadays is “What shape is yours?” accompanied by a point to someone’s wrist. Students changed the bracelet trend from last years, raver bracelets called Kandi, to the now oh-so-popular Silly Bandz

By August 2010 more than 8,000 stores across the U.S and Canda carried Silly Bandz. Quizno’s Subs then also began to advertise their food by putting Silly Bandz in the kid meals.

“I don’t think this trend would last very long because it’s just in for a season, as usual,” sophomore Brianna Provencio said.

Some classrooms have banned Silly Bandz for the reason of students being distracted and not paying attention during lecture. Who ever thought that a little rubber band bracelet would ever be such an amusing thing for students. Silly Bandz is just one of the many fads that will come and go this school year.